Share All sharing options for: This whole OL problem 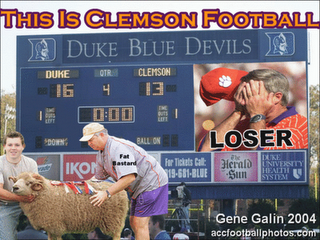 So this week it looks like Hutchinson has been moved to backup at center, after Bowden just mildly praised his play here. while Lambert (a 4th year Jr now) has been moved to LG now that Hairston is coming back, when he couldnt cut it at RT. Perhaps they should think about moving Hutch to Center, since Austin was screwing up a few snaps this week. There is no excuse for botched snaps after Week 1. The State says that Thomas Austin called a players-only meeting yesterday, woo.

Since this is our major crisis, I decided to look at the last 5 classes of recruits and see what we have brought in the last few years. I've put in their Star Rating from TigerIllustrated to see how they were evaluated coming in.

A class fairly deep in terms of OL numbers brought in. Lambert was the star of this class from a recruiting ranking standpoint, however he couldnt get the grades and had to be put in for 2005's class. Hutch is still here and is the only one left of this class still at OL, Robinson was moved to TE.

2006
Chris Hairston - 3
Jamal Medlin - 3
...and thats it. This was a smaller class, and the key went to Defense that year in recruiting.

2007
Mason Cloy - 3
Wilson Norris - 3
David Smith - 3
Landon Walker - 4
This is the class that comes in after the 2006 season, when the OL play and lack of depth hurt us at the end of the year. Cloy, Smith, and Walker have started this year.

Now, the way Rivals rates players is roughly the following, since I've followed it over the years . 1-may contribute, 2-will contribute and possibly see good PT, 3-solid player, should start as an upperclassman; 4-likely All-Conference caliber, raw, needs coaching to be NFL; 5-NFL-caliber talent, should play some as a FR.

Now I dont expect every 4-star or 5-star player to make it to the NFL, its not easy. I do expect them to start within a few years or at least be a solid player. I think thats fair enough.

Right now, Humphries, Cloy, Smith, Hairston, and Grant are all fighting injuries. Hutch was moved from Student Assistant back to the OL even before the Bama game due to an injury.

Humphries and Austin have been fighting for C since they got here, the loser playing G. Time to FIX that. Corey Lambert shouldn't be bouncing from position to position, he shouldve locked down the RT job opposite Richardson last year and we shouldn't be seeing Walker take it.

With the exception of the 2006 class, every one built depth. We should have plenty by now at OL. All of these the last few years have been 3-star players, which means they should at least be solid players, even as backups. With good coaching they shouldve improved to the point where we arent where we are right now. Therein lies the problem. Brad Scott has been at OL since Spence got here, was TE coach before that, thats been a few years now.

But its no longer time to play musical chairs with coaches like we did with Jack Hines, Bowden should've seen the problem from 2 years ago and fixed it.