Share All sharing options for: The first Bring Back Danny article I've seen.... 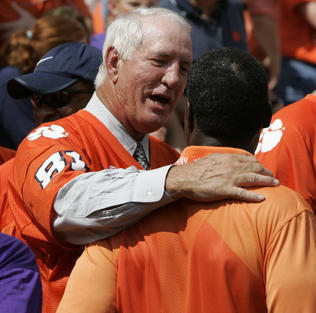 Today in the Charlotte Observer I saw this Sorenson article.

Separated from the Clemson campus by a few two-lanes and a lot of dirt is a farmer. He spends his days with bulls and he spends as little of his money as possible at the local diner, where he argues with his buddies about whose turn it is to pick up their $4.25 tabs.

Danny Ford probably is a heck of a farmer. But he was a better football coach. In 11 seasons at Clemson he went 96-29-4 and in 1981 won a national championship.

If I'm Clemson, I embark on a national search to identify the mid-major coach or major college coordinator on the cusp of greatness. I meet secretly with the candidates in nondescript hotels.

When I finish, I take the two-lanes to Ford's farm, driving slowly as I approach to avoid destroying my axles, and ask the questions that need to be asked:

You still burn to coach?

You have five seasons left in you?

Will you at least try to get along with the administration?

Do you promise to beat Steve Spurrier at South Carolina?

If he says yes to each, I hire him.

Since Ford left after the 1989 season, three coaches have attempted to replace him.

The first was Ken Hatfield. The Clemson fans all changed their name to McCoy.

After Hatfield came Tommy West. He lasted five seasons, one more than Hatfield. Nobody remembers them.

Then came Tommy Bowden. His 10-season run ended Monday morning when he stepped aside as coach.

Bowden was scheduled to meet the media early in his reign and I asked if we could talk alone for 10 minutes. Where, he asked? Since he was going to be at a restaurant, and there was a bar next door, I suggested we could find privacy there.

He said he had never been at a bar and was not going to walk into one for me.

I remember thinking he'll be a great fit – at Brigham Young.

Ford was a great fit at Clemson (but not at Arkansas, where he finished his career).

Tommy Bowden's teams were soft. Don't get me wrong; he is a good coach, creative and clever. He had great recruiting classes. But he never had a great team.

He'd win just enough to give fans hope. And then he'd lose the game he had to have and the Tigers would finish the season in some National Invitation Tournament Bowl.

To be fair, Bowden did go 72-45. That's good enough to keep a job at North Carolina or N.C. State, but not at Clemson.

Clemson fans are entitled to more.

They're entitled to a coach whose teams are as tough as he is, a coach who understands the significance of Clemson football and a coach who is capable of returning the program to its rightful place.

I know just the guy.

I would shed tears of joy, but it won't happen.