after 5 games where they barely beat Mississippi State and choke against Vandy.Fans called for his head previously, and Tubs listened.

But does Tom fire his? nope. Why didnt Tennessee take him? 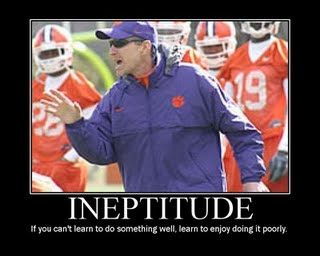 
Q: Do you have a different approach since the Maryland game?

"I don’t think we changed." = We didn't do anything any different than we always have, so we're going to keep doing it this way.

Q: Your approach after losing the conference game to Maryland.

"You treat all the conference games the same" = everybody has 85 schollies and everybody has a good coach, so we won't do anything different than we did against Maryland.

"Like I said, it creates a situation where the need to win is magnified. But, you treat them all the same. As the season progresses, the significance of a loss is magnified depending on how many you have." =I'm not changing anything I've done in the past, because I know you idiots will give me an extension for 8 or 9 wins, but I know my job is on the line again and I can get them to win when that happens.

A: "They ran a lot of option-type plays when Coach Grobe first came to Wake Forest. They still do, but not as much as they used to. It’s a different preparation. They put a lot of burden on their quarterback (Riley Skinner), who is an excellent player. He’s been a proven player for a long time. Their skill guys are good." =We're going to prepare for one, and theyre going to throw the other at us and we wont be able to stop it. I'm softening you guys up for the loss by saying they are good.

Q: On running back James Davis.

A: "As he has gotten older and more mature, he has practiced better. He surely came out last Saturday with a lot of energy and emotion. He has had a good performance in practice. His performance was a good indication on how he has been at practice. If you get your offensive line to stay healthy and be cohesive, then a running back increases his comfort zone." =I'm going to see if he gets 10 yards a clip thursday, and then I'm going to take him out and put Spiller in.

Q: On both teams coming off of a loss.

A: "They are going to be focused and we are going to be focused. The team that goes out there and executes the best is going to win. Whoever practices the best today and tomorrow and from an execution standpoint and repetition standpoint will win the game. It won’t be who is the maddest or who lost last. It simply comes down to a matter of execution."=Jim Grobe has less talent than me, and he's going to outcoach me to beat us.