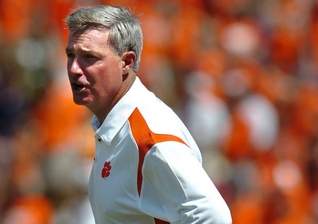 Q: Are your coaches involved in your message to the team?

A: "Yes. We discuss things in the staff meetings. Anytime there are things you have to address, there’s a protocol. There are certain things you do at practice to make sure they are getting it."

"We’re going out full pads, and there’ll be a lot of contact today," Bowden said during his weekly media briefing. "If somebody gets hurt, they get hurt. We’ve got to get better.

"We’ll make them feel that sense of urgency."

Clearly you dont do things to make them tough in practice Tom, they arent "getting it." Judging by this teams performance against Alabama, why the hell would it take until now to communicate this message? Then Bowden went on to say that he didnt show the Bostic article to his team....shouldve, might have woken their wimpy asses up.

Q: What needs to improve on your team?

And the offensive performance between last year and this year is very different Tom. I dont care how bad you beat them, you shouldve put 40+ on NC State again this year.

A: "He’s a big guy. He’s a guy you can’t arm tackle. He has a really good arm and has thrown a lot. He threw in high school and in passing camps. He’s very accurate."

Ask Willy Korn about Long, Gaffney ran all over Byrnes' ass twice with Long at QB.

Q: How did this game (SC State) come about?

A: "When I originally came here, my intentions were that if we were going to play a Division I-AA school, it would be an in-state school. That way we could keep the money in the state. The administration really did all the negotiating. They have a great tradition and history along with some pro guys. They have three former players in the Pro Football Hall of Fame."

WHAT? Why in the hell would you schedule 1-AA teams on purpose? Who gives a shit if they have people in the HOF?

A: "He reminds me more of his freshman year as opposed to his sophomore year. When you come in as a high-profile freshman, you have to earn everything you get. There has been a noticeable sense of urgency his freshman year and this year. He has worked hard all three years. It looks like he’s a little hungrier this year. He’s averaging eight yards per carry."

But what about the lack of carries for James Davis? Like Reggie and TZach and Spoon and Chad Jasmin, we dont give carries to Sr. RBs at Clemson. Hell JD shouldve went pro.