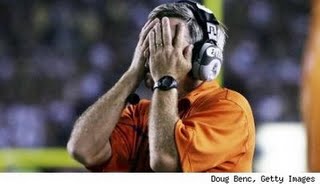 WTF? I'm not taking that one out of context either, he's talking about before his ST Coord. came on staff.

On Cullen:"He's ahead of last year on a couple things, behind on TD's, ahead in INTs, so it depends on what you want. I'd say 1.5 of his INTs are his fault."

"We're running the ball better. Thats why we have less TD's passing."

WTF? Yeah against El Cid, SC State...and we cant get WORSE than what we did in Atlanta.

We werent worth a shit with 5 upperclassmen on OL last year. Richardson? waste of talent, Brad never developed...Lambert? why was he rated so highly in HS? Brad wont turn him into anything. Anybody remember Akil Smith?, same story as Barry Richardson. Bowden finally brings in 300lb linemen, (compared to the 225lb linemen he brought in his first few years and had to sit 3 years to bulk up before starting) and cant develop them either.

Light a fire under their fat asses and if they dont get pissed off enough to play, dont play them. They'll get tough or quit.

"I get paid to take the heat."

And before UGA and Wake a few years ago, and before Texas Tech....and before Kentucky...and VT last year...

I'd tell you to figure out how to tell better, but you havent for the last 10 years, so why bother.